When you hear the word ‘anniversary’, what thing comes first into your mind? Is it something like celebration? Or a birthday? Or a commemoration or milestone of an achievement? The word anniversary has different meanings after all. It can be in a form of birthday, memories, death day, or even a celebration to remember the day or history of that event made.

So then, anniversary can be used at any kinds of occasions. Today, this Episode is going to be a special one! Also, today, I am celebrating my fourth year stay in the LoveLive! Universe! Yeah, I mean, my fandom anniversary! Yep, it’s been a very long run this time around! Also, in this very special Episode, there are many things that has happened! You can find out more by reading further in this Episode!

Alright! Let us know and read what’s inside this Episode 13 of School Idol Festival Journal Log! Are you ready? You can continue reading below and enjoy the fun and… drama!

If we have an upcoming Online LoveLive! LOST WORLD by Aqours, then we could have Saint Snow in their first ever GIG! Check out below!

Their first GIG shall be held into ‘two-part’ tours. The first one shall be held at Yokohama, while the second part shall be in Sapporo. Each part will be held in two days (weekends), just similar with the previous live events held by the LoveLive! team.

You can refer more details about the dates and sessions at the official website itself. Ticket lottery applications are now on-going for both on the tours! Remember that the dates shown are just ‘tentative dates’, since they might cancel it due to the effects of the ongoing COVID-19 pandemic.

Do you ever feel the Aqours nostalgia — their debut until present? So then, for people who missed some of their hit songs and albums, then this compilation CD by Aqours is really just for you.

The Aqours CHRONICLE (2015~2017) is Aqours’ compilation album, which include some songs (about 45 songs) from the time that they made debut in the School Idol Universe, until 2017 or present time. It contains mostly from the previous albums released by this group, and from the TV Anime itself. Release date is on October 7, 2020, in some Japan music stores nationwide.

They included the bonus song in their compilation, entitled ‘Future flight’. And yes, they were previewed in YouTube just days ago.

Also, this coming Saturday tomorrow, it is the first Episode airing of the new TV Anime series, the LoveLive! Nijigasaki High School Idol Club! For more details about this, you can read this link!

HAPPY FANDOM 4TH ANNIVERSARY TO ME!

Remember this screenshot shown at the end of Episode 12 last week? That’s right! Today, I celebrate my 4th-Year stay here in the LoveLive! Universe! Yay! I shall be talking more about this one later at the end of this Episode! So please, continue reading this Episode until the very end!

Putting these now aside, let us go to the highlights that were encountered during this week on the JP and Global Sides of LoveLive! School Idol Festival rhythm game! Here it goes!

Round 18 Companion Match: It’s Our Time to Shine!

Let’s talk about the highlights and results of my progress here in this Event!

Last week, I had given an intro about the Round 18 Companion Match that has started last September 20th. So then, it shall be focusing on the CYaRon! sub-unit (Chika, You, and Ruby). You can backread the last Episode last week to find out more!

For the highlights last week, I got my motivation to grind more in the Aqours Event one more time. Actually, this is not my first time grinding hard for this one. It has started ever since with the last Guilty Kiss Event, the Challenge Festival Event. But then, I am just saying to myself that on every single Aqours Event that are commenced, I shall grind harder to the fullest until I get the Tier 1 Event Point Ranking position. I just also observed that I got only few µ’s members and URs in stable. So then, my JP Side is considered to be Aqours-only exclusive, and then I only grind in Events, given that Aqours is the featured one!

Also, last week, I got some several struggles when it comes to landing higher combo count in some songs. Sometimes, I am being placed with players with higher mic counts, and I am always placed at the last position at the Score Mission. In the Perfects Mission, I can land a higher Perfects count despite that I got a low combo count. But then, I am ended up in the 4th position if I can’t land more Perfects properly, and I always get more Miss count when that song is very hard (Some players can even land an ALL PERFECT even if that MASTER song is very hard!). The result is that when I am placed at the lower position and got no Combo Rank, I always get lower Event Points acquisition after every game (about 7,580 points per play, at 300% Yell Unit Bonus). There are some songs that I am able to land a Full Combo despite being an Easy to Medium Level 12 song. And the result of being in that position and getting a Full Combo in some Score Missions will give me at least 9,500 Event Points, at Yell Units at 300%. So then, making myself lose in some of the Live Shows had tended me to play more, and I ended up playing for at least two hours straight, or until my device’s battery is dead!

I got some struggle in making to at least Combo Rank C on some hard Level 12 MASTER songs. This is due to the fact that I got a random MISS note despite that I already tapped that icon which is incoming very fast. Also, in some point of the Swipe Notes, sometimes, my Swipe traction is failing and I get a MISS. The songs that I got struggle with can be a regular or a Swipe mode. MIRAI TICKET, DROPOUT!?, Aozora Jumping Heart, Brightest Melody, WATER BLUE NEW WORLD, and some other Level 11 song, Kaigandoori de Matteru yo, are some to name few.

Meanwhile, Kinmirai Happy End is the meta song for the Smile attribute, and the good thing is that my Aqours-only Smile Team is my spotlight here. I got almost no problems when landing a high Combo Count to this song, and this song has helped me to excel in the Event Score Rankings.

The current Companion Match in JP Side now has ‘5 Icon’ mode, another type of MASTER song that you would encounter in the future Events! This was introduced before!#lovelive #スクフェス pic.twitter.com/aot3zxbQOP

Aside from having MASTER difficulty being included in the difficulty setting, there are also ‘special’ type of MASTER mode which are also included in the song lineup. Just as seen in the embedded Tweet above, there are ‘5 Icon’ versions of some MASTER songs which were included! So that means, we can expect some of these in the near future Events!

The ‘5-Icon’ is another type of MASTER song, along with the regular and the ‘Swipe’ ones. This was introduced a long time ago, in an Event campaign that I don’t even remember! And yes, they can be found in your ‘MASTER Sides’ of your song library, in the Live Show mode. Some known songs that are included, to name few, are WATER BLUE NEW WORLD, Kinmirai Happy End, and PSYCHIC FIRE.

Round 18 Companion Match: It’s Our Time to Shine! Results

This Event has been concluded on the last day of September, placing me in the Tier 1-1 position. This is the second Aqours Event that I managed to place in the Tier 1 (Rank 1-500 bracket) Event Points Ranking, receiving better rewards!

There is also an ongoing Limited Signed URs Scouting for Aqours! So then, they were rare and expensive to draw. So if you are lucky enough to draw these in one go, then give it a try and test your luck!

October Events has been Named!

As seen in the previous ‘SIF Meeting’ livestream yesterday, the following Events for the month of October has been named!

As seen in their previous ‘SIF Meeting’ livestream last weekend, the following Events for the month of October has been named! See below!

Also, their sample preview of their URs has been shown already! Are you ready to fight for your best girl? If that’s so, prove that you’re a worthy fan for her! Earn more Event Points and be victorious!

Happy 4 Years of LLSIF Gameplay for Me!

I know the drill when it comes to these…. Score Match Points defense!#lovelive #LLSIF pic.twitter.com/czmg7lR7gv

You know the drill already when it comes to this type of Event! Earn more Score Match Points, prevent losing them, and place higher in the Score Match Points Rankings to get awesome and better rewards! Just remember to take a break in between if you have noticed that you weren’t able to land a Full Combo Finish on some harder songs, especially the easier ones.

Also ongoing with the current Score Match Event is the limited box scouting for both µ’s and Aqours! Mostly, the scouting boxes contain mostly some Standard URs that were released previously. So then, if you are completing a certain set, or if you have a certain UR that your are looking for to complete your dream team project, then do scouting on these!

My recent draw is the embedded Tweet above! I had drawn a Maki UR when I attempted to scout, not because I like it. It is because I am completing a ‘project’ in which I can use it to excel in some Cool attribute songs. Before I scouted for Maki UR, I had bought a Rin UR from the Seal Shop, at the time of the last day before it expires.

It’s been four years ever since I got introduced in the LoveLive! Universe. In fact, I had already make it this far! Happy 4th Anniversary to my LoveLive! fandom — a fourth year stay in this fandom!

So then, the saga still continues. I shall continue to be staying once more in this School Idol Universe for another year. From now, we shall be having µ’s, Aqours, Nijigasaki High School Idol Club, and the impending Liella from the future LoveLive! Superstar!! series! That’s right, I should be aiming for a five-year run with this series, making it my longest stay in any fandom ever!

And to look back on the third anniversary of my fandom, you can read the following below to find out what has happened last year!

Click on each Part number above to read more!

Congratulations to Ruby Kurosawa’s Special Video that has reached over 1 million views on YouTube! Sweet~

Talking about the next Episode… It can be very long again due to the fact that most announcements are made at weekends, and I tried piling them up just in order to include them in every pre-Episode highlights! Now that we have upcoming Events in the JP Side, sideline limited scoutings on both sides, ongoing Score Match Event on the Global Side (and the upcoming major Version 7 update), and the premiere of the TV Anime of LoveLive! Nijigasaki High School Idol Club this weekend! Those are the things to expect next Episode on School Idol Festival Journal Log, and I am giving you some spoilers already for that!

Things had already broken loose, and what shall happen next? We shall find out in the next week’s Episode of School Idol Festival Journal Log on Inori-D Station! Tune-in next week, and enjoy the NijiGaku Anime this weekend! Cheers~ 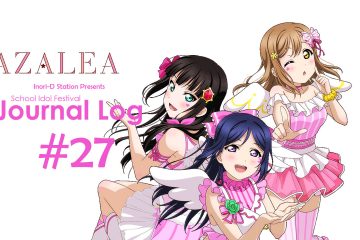 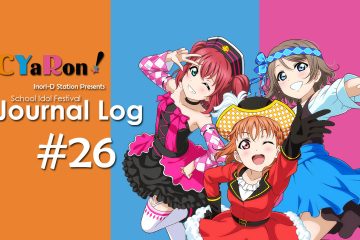 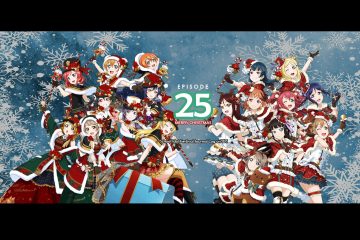