Note: This Episode is based from this old post.

Hello, this is me! It’s Slob, the Ugly Otaku! Let us talk about some Otaku things, where most people, who liked Anime and video games, can like some new, unfamiliar things!

Today, we shall be talking about some topic… It’s about playing in arcades!

What is arcade gaming? Arcade gaming is about playing video games in public. Such as that, you just need to insert some coins in order to play one play or session! Arcade games are in a form of machines or hardware, in which they can be called as “arcade cabinets”. And arcade gaming is somehow a gateway for fans who would wish to enter into the world of video gaming. More likely, it is like a stepping stone where they shall be introduced with a simple, yet difficult to control gaming mechanics.

Arcade games can have a “one-shot linear storyline”, where you could finish it in just less than one hour. The progress is fast-paced, but the gameplay is difficult, in which you shall be needing a lot of “continues”, if you are going to finish its story or gameplay.

What are the types of arcade video games are there? Somehow, the popular ones, for me, are the racing, shooting, fighting, and the step-dance rhythm arcade games. And usually, the ones that I have been playing the most are the shooting and racing arcade games.

And then, I had been hearing some news that some old, popular arcade gaming centers are closing down in numbers. Since the rise of the popular home video gaming consoles, and some free-to-play gacha smartphone games, the people who are going outside to play on arcade cabinets in some malls or amusement centers have been slowly decreasing. Yeah, right, and the development of some new gaming technologies have caused this, and the recent pandemic strike that has caused some arcade gaming centers to close down.

For Ugly Otakus like me, I ain’t motivated to play on these anymore. Because, not only of the newer advanced gaming technology have impacted me, but the gaming mechanics were just only repetitive and linear. Something like you would only play because of high score to beat other people in the local rankings. And also, the game is fast-paced, making me really bored in playing it as time goes by. Sometimes, I am really not throwing away some money in order to buy some tokens, in order to play some classic games which are already dying. But then, whenever I had run out of things to do, or if I am bored, I am just telling myself to refresh my own mind by just playing in an arcade cabinet.

During that time, when those arcade cabinet machines are still popular, what are the types of arcade gaming do you like most, and why?

Are you fond of Cosplay? Or you, as an individual, do like doing Cosplay yourself?

Next time, “Cosplay Galore“. See you next time! 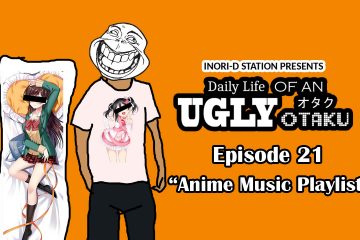