Alright! Here we go again! Let us have some blog post report about this Event that I had recently attended in the past weekend! I am going to give some of the highlights, since I had only attended the Day 2 of this Event!

The photos are in a slideshow below. Slide or swipe either left or right to view them, as well as reading along with the captions included!

So then, let’s head on to the review proper of this Event! So far, what could be some of my impressions in it?

First and mostly, it was actually held at the end of April, up to the first day of May 2022. In which it also marks the start of the first local Anime convention this year since the pandemic, it is quite a long time since I had attended a local convention, isn’t it?

For the venue, it is quite big and spacious, since there are lots of people who went inside! And did you know that I got easily tired walking around because there are lots of booths and areas of interests, wherein I could use to go and to hang out! Of course, aside from hanging out to those places and booths (notably for Anime figures and merch), I could have an option to meet up witth my circle of friends! I am usually stationed at the outer-most parts of the convention hall, where I could eventually sit down while piling up my plushies onto their “Nesoberi Wall” corner!

So far, here are my items acquired from #CosplayCarnival2022 last weekend.

For the booths, I didn’t get enough time to explore more, and to browse some merchandise there. But then, I was able to brought home some few “LoveLive!” merch, in which I had managed to bought them from a certain booth there! Don’t worry, and those aren’t that costly too much.

And also, they have booths, in which they serve foods there! Good thing that they have those because going outside for a restaurant break can give you a hard time due to waiting queue line there! But only, the prices of those foods inside the convention hall are mostly expensive or costly! Imagine that I could buy a 50 PHP junk food snack there, while it only costs for only about 25 PHP when bought from a sari-sari store! All I can say that buying foods within a convention is bit costly, though its prices are just TWICE from the regular prices you see from some sari-sari stores. But then, they should avoid doing “overpricing” in some foods, though it can only just give you the same taste as the other ones you saw when you are outside of the convention.

Cosplay photos? I am sorry, but I didn’t have much time to walk around the hall, just to take photos of me with these Cosplaying girls and boys. But then, I had managed to take at least one (as seen from the slides above), which features a dancing contest which showcases the Cosplay duet.

And lastly, I was able to meet some of my friends there! In fact, I was able to do that simultaneous “SBL Play” in the LoveLive! ALL STARS game — courtesy of my friend in Tinotormed’s Backyard! I was going to plan and include that to my upcoming Episode in my segment, but… Maybe next time, I could include that, perhaps? Who knows when!

And then, overall, the convention can be only up to average rating, for me. This Anime convention can do a lot more potential, especially if they don’t screw up with the selling of the venue tickets, whether online or on-site. You can read more below for some of the issues!

While this Event is going almost smoothly as planned, there are some issues, in which it can made some con-goers go sad, or even mad.

First and mostly. Day 1 is just way TOO BAD than Day 2, in terms of organizing the queue lines for both online and on-site tickets selling and verification. Aside from buying the ticket before the Event days, people who attend should be FULLY VACCINATED (with booster shots) before they could enter the premises or the convention halls. And then, since Cosplay Carnival 2022 is a local Anime convention, which falls under the “mass gathering” events, social distance and other health safety protocols were no longer observed. Going back, like I said, Day 1 queue is just pretty bad, according to my own group or intel. I had also seen a video from someone, in which it was recorded during the Day 1 queue — The group shouted, “Refund! Refund!”, or something like that. And then, I am feeling sorry for those con-goers, who had the Day 1 ticket, who never got inside the convention hall due to the massive, non-moving queue line, in which it took them at least 3-4 hours before reaching inside the convention hall.

Second and lastly. Day 2 (Also the day which I attended) is not as bad as in Day 1, where queue lines are slow or not totally moving. This time, the staff announced that they are no longer selling tickets, whether online or on-site, anymore just in order to avoid issues with regards to what has happened since Day 1. Because of that, I was able to get inside the hall, in just at least for one and a half hour. That time in the mid-afternoon, when I was walking around in the convention center to go to a comfort room, I do still saw many people outside who walk in a queue just to get inside to attend this Event. But then, for people who had missed buying the pre-selling of online tickets before the days of the Event itself, then it’s a total regret.

Basically, I have learned something new when attending in this Event. So then, it is really suggested that you should buy those Event tickets EARLIER than in the days before the actual on-venue Event starts. And that is, in order for you to avoid the longer queue lines, the only way to enjoy some local Anime conventions further. While hoping for the organizers of the Event to learn their valuable and moral lessons the next time they organize this kind of Event, we just need to expect something more, and we should not be doing the same mistakes as in the past, even just before this ongoing coronavirus pandemic has begun. 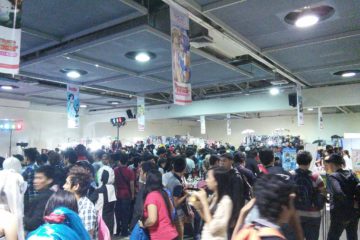