Devil in the Deep Waters

In the lake somewhere, some people are kidnappped by some creatures who dwell within the waters. When they heard voices that told them to stay away, they are kidnapped afterwards.

Those creatures are the Digimons, who were known as the Gawappamons. They brought the people to their mastermind, named as Shaujinmon, who was revealed later that he has gone berserk and mad.

Ruli got kidnapped, and was later warned by the Gawappamons about Shaujinmon. Meanwhile, the Gawappamons had found out that the beads at the neck of Shaujinmon has been cracked, causing it to go mad and berserk. What Ruli and others must do to stop the running-amok Shaujinmon?

Weird Episode… Anyway, let’s have a review and impression!

Angoramon is totally not chubby, after all. What makes him chubby is his golden furs around his body, as well as covering his eyes with it. This was revealed after Angoramon sank into the waters. And Espimon made use of the flashy lights on its eyes.

It really shows in this Episode that Champion forms of the main Digimon heroes are becoming useless now. And then, the Warp Digivolution shall be the new tactic or strategy here. But then, it shall be just the same when going into higher level forms, assuming that it got only some few minutes to stay on that form.

Lamortmon, Angoramon’s Ultimate Level form, is just like an out-of-control switch. In the sense that you switched it on, there is no way in stopping it until you drop into the ground. And the only way to stop it? Imagine it is like stopping the angry Hulk with something that can calm or settle him down.

Digimons of the Week are becoming more difficult to beat, and they are requiring the heroes to battle them with the Ultimate Level forms. Think of it as playing in an RPG video game, wherein you must be in the same level as in the enemy in order to keep up the pace.

Story is something like a reference from some famous hollywood films, which would involve monsters or devils which would pull a suspecting victim into the waters, then killing them afterward. The story in the Episode is bit complicated, since the involving Digimons were just commanded by a master Digimon who appeared as losing his sanity without his minions knowing.

And then, I have learned that we should avoid going alone, especially when we stay along nearby in the lakes. Something might happen, especially when it gets dark — Who knows that there is a terror without you knowing? And also, I have learned that we should listen to the people around us about the possible warnings or dangers that we can encounter, especially if we continue in doing our activities. Something like… When it is cloudy and dark, and you make a party outside without any roof, are you still going to continue to commence that event, or possibly you could cancel it due to unpredicatable bad weather?

The message of the Episode is really inspiring, and I had learned also that some creatures need some home in order to live properly. But then, it is really not easy in finding one because nature and life is unfair. That’s probably the popular “Survival of the fittest” phrase in which it is also present within in this Episode, somehow.

Overall, the Episode can be enjoyable to watch for kids, but not when you can’t understand well the meanings behind with the story theme.

What Can I Learn As A Beast Tamer? 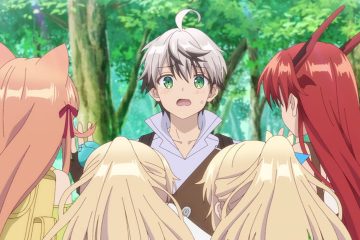 Which Weapon Should Rein Use?