The End of the Arcade Cabinet Era?

We are going to talk them right here in my first part of the IDS Special Blog Post Report!

While most of the original, classic, arcade cabinet video games are still existent in the gaming world, especially in Japan, they are kept alive by simply putting them into display for the people to play it. They start play it by inserting coins to the arcade cabinet machine.

GAME START! That’s what you get when you begin playing it, and the game start theme song shall start playing around you. You can go either shoot ’em-up, beating the baddies out before you can advance to the next area, and even going to the most famous one-on-one punch and kick duel — only in the game! Mostly, these video games in the arcade are not so beginner-friendly. So then, some advanced knowledge in controls and strategies are required in order to clear that arcade video game without even using continues. Otherwise, you can get the generic GAME OVER ending if you can’t even finish one stage or level.

Those were the days when these arcade gaming centers in Japan are still so popular, even when going old-school.

In year 2020, it was the year when the COVID-19 pandemic has begun its part by infecting more people worldwide. Also, this pandemic has prevented most of these arcade gaming centers to operate because mass-gatherings are not allowed. And sometimes, they are only operated on a limited capacity, depending on the protocols or guidelines given by the Japanese government during the nation’s state of emergency.

And because of the series of the nation’s state of emergency occurring to at least 20+ prefectures in Japan, including Tokyo, some of the businesses, shops, and some old-long-running businesses, are eventually closing down one by one. And then, some leisure businesses, like these arcade gaming centers, are beginning to close down one by one.

One of the arcade gaming centers in Japan which was shut down recently is the Sega Ikebukuro Gigo. Established since July 1993, this landmark has been closed down since September 20, 2021.

The staff of that arcade gaming center has thanked its fans and customers who kept supporting them since its establishment. And stated also at their announcement of closure is that their building lease agreement (some sort of contract or something like user agreement) has already ended or expired, since that building where they lease rent is scheduled for renovation.

And there are many reasons why these are shutting down, not only because the COVID-19 pandemic has hit them.

According to the last part of the post by Brian Ashcraft from Kotaku, the fall in the number of arcade gaming centers in Japan is slowly rising as the year passes. With about 22,000 of them existing in 1989, now they are about only 4,000 of them are existing. When the cultural changes and the COVID-19 pandemic has struck them, the numbers are beginning to drop very fast, and even the bigger ones are starting to disappear.

Not even a legend of legends can overcome this COVID-19 pandemic forever. In last November 2020, one of the oldest arcade gaming centers in Japan, the Shinjuku Playland Carnival, has been closed down after operating for at least 48 years. And that arcade gaming center is popular due to the fact that they have a very good selection of arcade cabinet games there, ranging from the ones that existed in year 1990s, and so on.

After its closure, many people are missing some good old memories and moments there, which in fact, they can never happen ever again in the near future while they are still alive.

Pandemic is not only the reason. What are the others?

We can later find out that the COVID-19 pandemic is not only the reason why do most arcade gaming centers in Japan close down in numbers. Actually, it has started a long time ago, even just before the pandemic crisis has begun. There are other reasons, such as that some arcade gaming center’s contract or agreement with the owner of the building has expired or ended. And another such reason is that some arcade gaming centers are losing more of its customers who play and visit, due to the fact that the rise of the ‘ported versions’ of these arcade cabinet machines into popular video gaming consoles are slowly becoming a trend.

So what is this new trend that makes these arcade cabinet machines and arcade gaming centers in Japan die in existence?

Tune-in next time for the Part 2 of my IDS Special Blog Post Report to find out! Cheers! 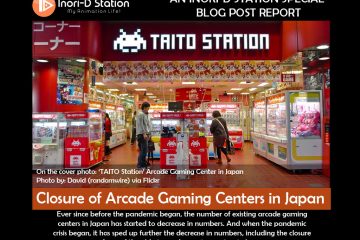