In this Event Report of mine, I am going to show you some highlights of it, as well as my reviews for this one!

Last Thursday, December 9, 2021, I was able to make through this venue, by means of driving a car. In fact, this was almost near to the place where I got my exclusive Anime figure, that time.

Right now, let us proceed to the highlights, reviews, and some of my observations and opinions!

Basically, you can read some captions which were included along with the photos in the slide! Be sure to slide either left or right in order to view them! And make sure your current web browser that you are using can able to support this feature!

While I ain’t revealing all of the photos that I had taken while I was there, these were already uploaded to the IDS Facebook Page. Just go to the photos section of my Facebook Page, then find the album that contains some words, like HoYoFest there!

During my visit, I was able to do dine-in as a walk-in customer.

For the selection of foods, they are ranging around at least 200 pesos per set. But in their limited-time collaboration with the HoYoFest, each of their food set or packages shall cost at least 450 PHP each (approx. 9 USD). There are other of their foods available in their menu set, but I didn’t manage to try them all due to my budget concerns. I had tried their Set D food set, which contains the beef-steak-styled dish (Black Pepper Beef). Since it was combined with peppers and onions, most likely that food is spicy even if there is no chili. But then, that food is tasty, and I was eating that while writing my blog post entry during my dine-in. For the other side-dishes, like the fruit jelly one (I forgot which flavor did I eat), there is nothing special, except when it is decorated with something else.

Along the food set that I had eaten, I am able to receive some few freebies out there, in which it contains mostly stickers, and some other items like the paper poster (used as a dining mat).

Despite that it is a very good place to hang-out and to dine-in with, there shall be always controversies and other drama in which it involves some customers and the cafe and restaurant management themselves.

Sometimes, issues like these can’t be tolerated by the staff. And that can deface and demoralize the Filipino fan base of the miHoYo gaming universe, not just Genshin Impact.

And this is the end of my blog post report! I hope that you get something, haha

Attending and visiting a limited-time collaboration event is very interesting, especially if you got a lot of spare time. Since that time is miHoYo-themed (They are currently featuring Genshin Impact), I was able to drop by at the time when it was just a few days away from making their collab event into a conclusion.

And what is this Moon Rabbit Cafe and Restaurant that I had visited before, where this limited-collab event has taken place? As I am going to end this post, have some info below! Thank you for your time reading this! See you in the next blog post topic! Cheers~

ABOUT MOON RABBIT CAFE AND RESTAURANT

Moon Rabbit cafe+restaurant is a cafe and restaurant establishment in Philippines. It was based from Ledesma Street, in San Juan City, Manila, Philippines. Their foods are mostly Chinese or other Asian-themed foods. They also serve coffee as their cafe products. 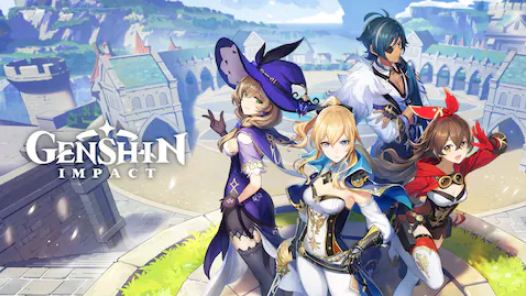 Genshin Impact is a cross-platform video game created, developed, and published by miHoYo in September 28, 2020. Cross-platform means it is playable not only in iOS and Android systems, but also on the PlayStation 4 console and PC.

Genshin Impact takes place in the fantasy world of Teyvat, which is home to seven distinct nations, each of which is tied to an element and ruled by a god associated with it. The story follows a twin, referred to as the Traveler (with the gender chosen by the player), who has traveled across many other worlds but has become separated from their twin sibling (of the opposite gender) in Teyvat. The Traveler travels in search of their lost sibling with their companion Paimon, and becomes involved in the affairs of Teyvat’s nations and gods. (Wikipedia)

miHoYo is a game developer and publishing company. It is founded in year 2012 by the three graduate students from Shanghai Jiaotong University.

miHoYo has created several video games in which it uses mostly the ACG (Anime, Comics, and Games) genre. While most of their titles are featuring cute and sexy Anime girls, they had created at least five (5) different video games under their company name.